Have We Forgotten The Kamala Mills Fire Accident?

Fire hazards are common in India and there have been several cases that have resulted in casualties. The fire accident at Kamala Mills Compound in 1 Above Pub and Mojo’s Bistro Pub located in the Lower Parel in Mumbai is one of the most infamous fire accident. The major fire accident claimed the lives of 14 people and more a dozen people were injured. The accident happened on 29th December 2017 at 12.30. Kamala Mills compound houses offices of many TV news channels and famous restaurants and pubs. We are approaching the one-year anniversary of the saddening fire accident. Let us have a look at the proceedings in the case so far and what actions have been taken by the government till date.

After the news of the fire broke out, The Mumbai police filed an FIR under section 304 of the Indian Penal Code (IPC) and several other sections have also been included in the FIR including common intention and endangering the life of others. Bombay Municipal Corporation mayor Vishvanath Mahadeshwar orders an in-depth inquiry to seek the culprits.[1] 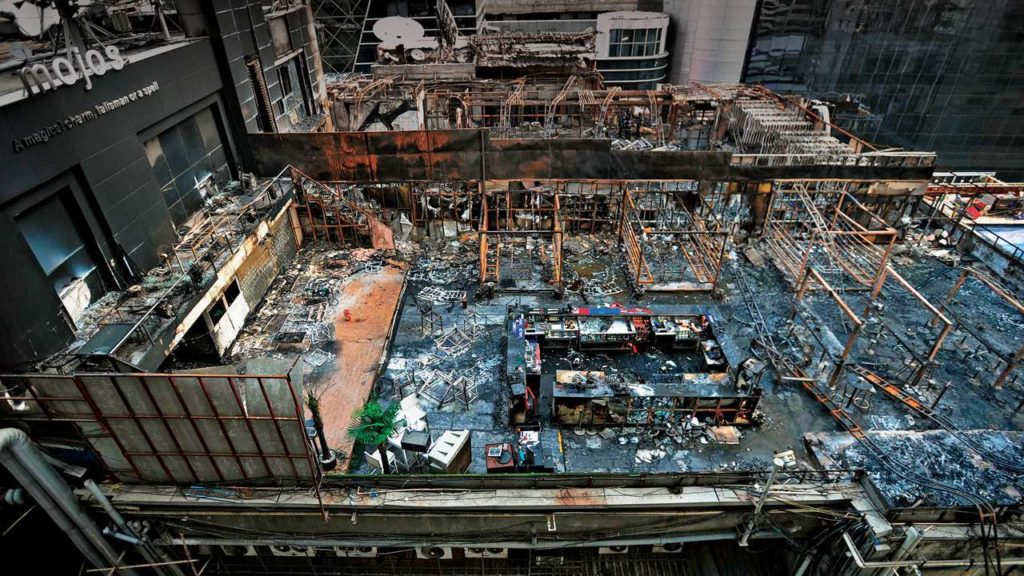 Just one day after the accident, BMC cracked down on the bars and pubs located in the Kamala Mills Compound with illegal extensions. 314 restaurants, bars, and pubs suffered at the arms of the bulldozer and 7 restaurants were sealed for violating the guidelines. Additionally, the police also issued lookout notices for the partners who owned 1Above restaurant that was the major cause of the fire. [2]

Following the fire accident that took the lives of 14 people, the Mumbai Police went on an arrest spree and has arrested more than 8 people so far including Ramesh Govani, the owner of Kamala Mills Compound, Yug Tulli, one of the co-owners of The Mojo’s Bistro, three owners and two managers of the 1Above Pub where most of the deaths took place. [3]

A judicial committee appointed by the Mumbai High court has recommended strict actions against the owners of the Kamala Mills Compound and the two rooftop restaurants – Mojo Bistro and 1Above. According to the committee, “appropriate punitive actions” must be taken against the trio of the owners of the premises and pubs involved in the accident. [4]

17th May 2018: Bail Granted To co-owners of Kamala Mills Compound

On May 17, 2018, a vacation bench of the Bombay High court granted bail to Ramesh Govani and Ramesh Bhandari, the co-owners of the Kamala Mills Compound on the ground of the fact that both the co-owners were unaware of the illegalities that were incorporated in the two pubs involved in the accident. [5]

The Bombay High court rejected the bail pleas filed by the owners of Mojo Bistro and 1Above Pub. [6]

The Supreme Court granted bail to Kripesh Sanghavi and Jigar Sanghavi, the owners of the 1Above pub where the fire broke out last year. [7]

Inspections and other actions after the incident:

Post the gruesome incidents there were series of inspections took place, not only in Maharashtra but across major cities in India. In Mumbai, there have been 48434 fire calls received by the Mumbai Fire Brigade since 2008. [8] A whopping 1479 eateries, multiplexes, malls in Mumbai have been flouting fire safety norms. Following the inspection, 386 eateries have been demolished and 36 nightspots in Bandra have been shut down due to non-compliance of fire safety norms among the other violations. According to this report, in 2017 alone, there have been 4790 fire incidents across Mumbai.

Are the violators punished? Are they penalized for deviating the fire safety norms?

Authorities are yet to provide justice to the relatives of the deceased and the injured persons that gutted the Kamala Mill Compound in Mumbai.

This Incident is spoken for a while, then drained from people’s memories as yet another fire accident. At least we should consider this as a lesson to revamp our age-old fire safety rules and have a proper implementation of fire safety norms. Only then can we prevent incidents like these in the future.