Have you ever given a thought to fire safety? Many of us do not know that fires & smoke can be extremely dangerous and a fire accident can happen anywhere, anytime and, to anyone.

So, it is essential for you to know about fires to protect yourself from an accident or prevent it in the first place.

According to FICCI’s Pinkerton India Risk Survey 2017, fire is the 5th major risk for India. In India, every year thousands die in fire accidents.

Residential fires amount to 20% of all the fire accidents

10 Important facts about fires and smoke:

As you may know, asphyxiation is a state/process of being deprived of oxygen. (source: Wikipedia)

During fire accidents, a room could be filled up with poisonous gases and these gases like replace the oxygen in the room. The common asphyxiant gases are nitrogen, argon, helium, butane, and propane.

Butane and propane are the components of LPG.

Due to this, many of the fire victims succumb to smoke before getting burned.

Hence, it is always better to prevent fires. Installing a smoke alarm could save you from asphyxiation.

The infographic helps you to understand the uses of smoke detectors. Though smoke detectors are not popular in India, consider installing it in your home if you care about the safety of your family.

What should you do in case you are stuck in smoke?

If you are caught in a fire, Get out and stay out of the building. 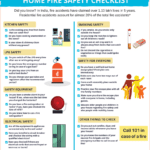